Paulo Coelho's is a name I haven't missed, but somehow up until now I have never put my mitts on one of his books. I think it might have been an omen that in the day before I went to the library I saw two pieces about him and his work, walked into the library, randomly picked a shelf to browse and there his books were. If you haven't already read this book it might become clear why this omen tickled me having finished it. 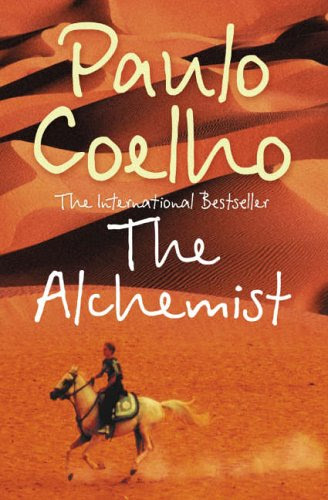 A young Spanish shepherd has chosen a life that has allowed him to travel, rather than be cloistered within the walls of a seminary. He has a recurrent dream that he will find treasure in the Egyptian pyramids, one that he would not have acted on but for a meeting with a man who somehow knows a lot about the shepherd. He convinces him that he should follow his dreams, and that if he looks out for the omens he will be guided to success. The shepherd goes ahead and sells his flock and heads to Africa. While travelling to Egypt he meets various messengers including the alchemist who can turn lead into gold. The alchemist becomes his mentor and he learns about the Soul of the World. By the end of the book the shepherd has learnt valuable lessons, and has found his treasure in an unlikely place.

I have to say I was pretty underwhelmed by this book, possibly I was expecting too much thanks to the author's reputation. I didn't really connect with the shepherd, who is referred to as Boy throughout, or any of the other characters who cross his path. I did enjoy watching him working through all the things he learned and applying them to his life though. The tale is written in simple language and short sentences and was an easy read, although all the discussions on the Soul of the World and how everything is one thing, and the references to religion gave the book some substance. However overall my feeling was that this book was probably well suited to a much younger reader than me, with a gentle spiritual and philosophical bent.

It definitely gave me something to muse on while I was reading, and it was a quick and enjoyable read, but I wouldn't highly recommend it.

Format: Paperback, borrowed from the library
My Rating: 3*
Posted by TC at 14:32