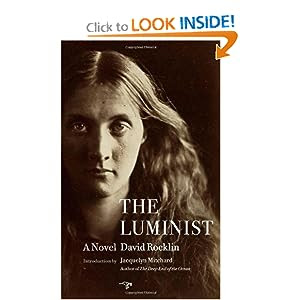 "IN COLONIAL INDIA, at a time of growing friction between the ruling British and the restless Indian populace, a Victorian woman and her young Tamil Indian servant defy convention, class, and heartbreak to investigate what is gained - and lost - by holding life still. Suggested by the life and work of photographic pioneer Julia Margaret Cameron, The Luminist filters 19th century Ceylon through the lens of an English woman, Catherine Colebrook and a 15 year old Tamil boy, Eligius Shourie. Left fatherless by soldiers, Eligius is brought as a servant to the Colebrooks' neglected estate. In the shadow of Catherine's obsession to arrest beauty - to select a moment from the thousands comprising her life in Ceylon and hold it apart from mere memory - Eligius transforms into her apprentice in the creation of the first haunting photographs in history." From Amazon.com
This is the first paperback I have read in a while and as I tweeted when I first picked it up and started reading it the other night it is the sort of book that could just make me feel I was missing something reading so many ebooks. The cover is striking, inside some of the pages are printed with a faint old map as a layer and I loved the formatting. I begrudged having to put it in my handbag in case I damaged it! I never usually mention this sort of thing when I do read a physical book so it obviously made an impact on me.
Catherine is married to a man twenty years her senior, with an older daughter and a young son, who survived his twin. The wish to capture her dead son's image so she might remember the light in his eyes forever drives her to try and perfect a new and as then un-named science, photography. Her family is the source of much gossip for other high-ranking Britishers in Ceylon, which leaves Catherine unbothered but seems to be a greater source of concern for daughter Julia. Much of the story is narrated in the third person from the point of view of Eligius. His father had managed to learn much whilst serving the British, but was killed in front of Eligius after trying to encourage the powers that be to improve their treatment of the locals. Eligius finds himself torn between taking up the cause and serving the Colebrook family. I wanted to like Catherine for going her own way rather than doing just what was expected of her, but I also felt sympathy as she came across as somewhat obsessive. The relationship between Catherine, struggling to fulfil the role expected of a woman of her status, and Eligius, who becomes an outcast and seems to become a surrogate son to Catherine is one of two lost individuals who share a common passion.
As far as the story goes this is an oddly beautiful book. The style is quite literary, which in places made for some lovely prose, while elsewhere I found myself drifting a little and having to pay attention to avoid missing some of the inferences that impacted on the story. This is a book that took a little while to get into and needed concentration to make the most of it. I also had a slight problem with the timescale, or more so a lack of one. It was difficult to figure out how long had passed between the various events, which isn't a major issue but I would have liked it a better sense of that. However on a positive note The Luminist tackles a number of interesting themes. It ranges from the impact of British Colonialism on Ceylon, and the role of women in the 1830s to broader topics like relationships and the need to explore and discover. I found it a fascinating read on a number of levels. For example as someone with a passing interest in photography it was good to sit and think about how far this art has come since pioneers like Julia Cameron tackled capturing images. I had never thought of how those exposed to photography in its infancy might have thought of it as ungodly.
I found this a very enjoyable read, although I am aware some people would be put off by the author's style. The historical fiction fan in me certainly liked the snapshot of life in a part of the Empire I haven't really read about before.