Earlier in the week I posted my review of The Memory of Water by J T Lawrence. The book has just been released and author Janita was somehow able to find some time to do a Q&A. 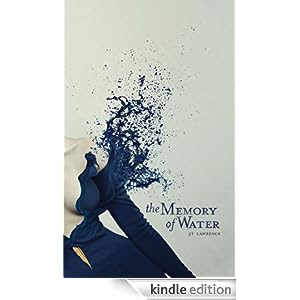 First of all her bio:
JT Lawrence is a long-legged redhead with a penchant for words and pretty things, who believes happiness can be measured in passport stamps, laughter decibels and the bulge of one’s bookshelf. Janita, an awarded art director with an advertising background, writes novels, plays and short stories in between running her online bookstore, completing her degree in literature and psychology, planting things, practising yoga and drinking beer.


And now for the questions.. When did you first think of becoming a writer and who or what got you interested in writing?
I have been a writer all my life. It began with my open-mouthed adoration of Roald Dahl in my crib, evolved into my first written poem at six years old (‘Twinkle Twinkle Little Dragon’) and matured into my first hand-written book at ten. A year later, and with my mother’s reluctant encouragement, I embraced technology and toiled my eleven-year-old nights away on our home PC to produce my next work, ‘Weirdale Primary’, presented dot matrix style, on canary-coloured bond paper.

How would you describe your books and style?
I try to write page-turners with pretty prose. I love stories that keep you up at night because you can’t bear to not read the next chapter, and appreciate equally a really well-constructed sentence, especially one that’s beautifully turned and pricks you in the heart (or the head). I strive to get both right, and imagine I need a lot more practice.
A recurring theme in my writing is betrayal; I’m not sure where that comes from, or why it keeps coming up, but my writerly self seems to be fascinated by it.

When you write do you have a particular routine you follow, and what do you find the most difficult part of writing a book?
The most difficult part of writing a book? Starting. After that, the self discipline to keep going. Also, the ability to shush your inner critic who sits on your shoulder like a particularly bad-tempered black parrot, sowing doubt when you are at your most vulnerable.
I don’t have a particular routine. I prefer to write in restaurants and coffee shops where nice people bring you nice things to eat and drink, and all you have to do is keep your bum in the chair and get as many words down as you can. I also write at home, but it takes more willpower as there is inevitably something that requires your immediate and urgent attention, such as the rosebushes that need pruning, or an apple and rhubarb crumble that needs baking.

Do you start a book knowing what the beginning, middle and end will be or does it take on a life of it's own as you write?
I always start with a rough plan, but am still experimenting with how much planning is good for my writing. Too much, and the characters don’t have room to do come out and play, too little, and the plot spirals out of control.

In The Memory of Water Slade seems to believe in experiencing life as fully as possible to get inspiration and to inform his writing. Have you ever done anything extreme or silly in pursuit of your craft?
I have done some ‘extreme’ things I guess, not to be listed here (Hi Mom!), but I wouldn’t say I did them in order to further my craft. On the flipside though, when Important Things happen to me, good or bad, I automatically think: take notes! I can write about this.

Do you think the growth of e-books and self-publishing has made it easier for authors to achieve success, or made it more difficult?
I think it’s wonderful that writers like Amanda Hocking have done so well self-publishing, and I think it’s great that any author can now get their book out there, instead of letting it collect dust in a lonely drawer. That said, as long as there is no quality control in the self-publishing industry, it carries a certain taint. Unless you are Amanda Hocking. Then it just carries millions and millions of dollars, and a mansion.

What do you like to read and do you have any other passions?
I am lucky enough to own a bookstore and read widely. My favourite writers are William Boyd, Margaret Atwood, Sebastian Faulks, Kate Atkinson, Emma Donoghue, Kathryn Stockett, Julian Barnes, Peter Temple, JM Coetzee … and the list goes on.
When I read Boyd’s ‘Any Human Heart’ I couldn’t write for a year. I thought, if I can’t write as well as him, then what is the point?
Apart from reading and writing, I like the usual stuff: travelling to new places (next stop: India), drinking beer/wine/hell-anything with friends, laughing out loud, gardening, yoga.

Finally, what are you working on at the moment that you can tell us about?
I am nearing the end of the first draft of my new manuscript, which is giving me a real kick. It’s about a young woman, a synaesthete, who finds out that the people she knew as her parents were really her abductors. Soon it becomes clear that someone will do anything to stop her from finding out the truth, which runs a lot deeper than she could imagine.
It’s set in the near future, in a kind of parallel-universe Johannesburg. I have been doing some research on what the world will be like in 2026, and am finding it quite mind-boggling, and end up boring my husband to near death with stories about rabbits spliced with jellyfish genes to be made to glow in the dark and suchlike.

PS. I have a nagging feeling you would like to read ‘Twinkle Twinkle Little Dragon’, so I have attached it here:

Twinkle Twinkle Little Dragon
How I wonder about your wagon
Going sixty miles an hour
Eating people sweet and sour.

Thanks to Janita for taking time out to join me and for sharing her early work! If you want to get in touch with her or find out more she is on:

Email ThisBlogThis!Share to TwitterShare to FacebookShare to Pinterest
Labels: Author Q and A, J.T Lawrence

I stopped by your blog today.
Ann

Hi Ann, thanks for dropping in!