After a bit of a break I'm happy to bring you a new Friday Author interview. Paraphrasing Danny, as a youth his main ambition was to find success as a musician, playing in and writing songs for a number of bands in and around Glasgow, with varying degrees of failure. As he grew older he came to realise that rock godhood was no longer a viable option, but it has always stuck with him how much he enjoyed the writing process. His career history isn't all that different to the main character in his book Scratch, and he now works in social care. On with the questions! 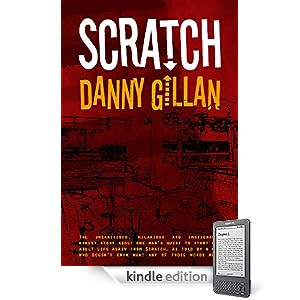 Email ThisBlogThis!Share to TwitterShare to FacebookShare to Pinterest
Labels: Author Q and A, Danny Gillan

Many thanks again, TC, for allowing me some airtime!

It's a bad habit, Stella, but I can't help myself!

I really do get the easy bit, sitting back and enjoying the fruits of your labour and writing about it. I think it's too easy to forget (or not realise) how much blood, sweat and tears (or cigs and wine) go into most books.

Blood, sweat and tears would probably be a lot cheaper!