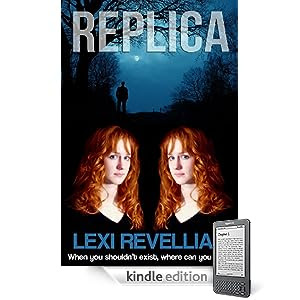 After reading and loving Lexi's first book Remix as soon as her second book was released it went straight onto my Kindle.

Beth Chandler works in a Government research institute, and is too passive, letting people like boyfriend Rob and boss The Prof talk her into saying yes when she really wants to say no. This is how she finds herself accidentally duplicated by The Prof in an experiment designed to create clones for military use. However instead of Beth being in control of her clone Beth 2 is an exact replica and a sentient being. When Beth 2 overhears a discussion demanding they test then destroy her she goes on the run. This book is written partly in the first person, detailing her life on the cold streets of London. Meanwhile Beth is unaware of the existence of her clone and is fed a story about needing protection from terrorists to explain the presence of Spec Ops personnel. She finds herself falling for her protector Nick, unaware that he is trying to find and liquidate her double. We see their side of the story written in the third person.

The idea of a Government lab somewhere creating clones is slightly disturbing but with advances in science presumably not completely beyond the realms of possibility, so the basic premise is really interesting even if it may require a small leap of faith on the part of the reader. It certainly threw up some good questions for the characters the rights of sentient beings even if they are clones created in a lab and effectively non-people.

Once again Lexi has written some great characters, and although the two Beths are the same person they show different personalities, driven largely by the circumstances they found themselves in. To start with Nick was the MI5 spec ops guy, determined to hunt down Beth 2 for termination, but I felt a bit sorry for him as he tries to deal with the conflict he faces in hunting down Beth's double once he has fallen for the original Beth. I did feel that Beth got involved with Nick too quickly though, it didn't feel in character for her.
I enjoyed the descriptions of London and the places Beth 2 visits while trying to survive on the streets, I got a real sense of how hard it must be.

This seems to be an average length book, judging by the number of kindle locations, but it took me no time to finish as the pace and tension kept me reading. It has been well proofed and formatted and was a really enjoyable read, another action with a bit of romance on the side.