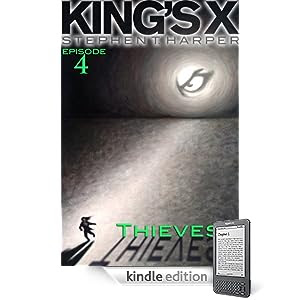 I was expecting a long wait at the dental surgery yesterday so I thought getting into the last book of the present installment of King's X would be a good idea. Typically just as I was about to settle down they called me through. However I managed to finish it off in bed this morning recovering from the remains of the sedation instead. It took me no time at all, being pacey and exciting.

This last book in the present series once again picks up the stories of Book and Molly in L.A and Broussard and Khali back in the 13th Century. This installment is quite dark, with a lot of action and more than a couple of the main characters facing death. Shahin plays a greater role and I felt he developed a lot as a character in this book.

Once again we find out more and more about the power of King's X, and more links between the two time frames are exposed. They gave me a feeling of a circle being completed and were very satisfying but I felt a bit daft for not seeing some of them coming. Book, who has really suffered throughout the books is finally starting to come to terms with what happened to his father before his death, and realising his life has changed beyond recognition but his greatest concern is still for Molly. This installment was pacey and action packed, but I was still emotionally invested enough in what was happening to the characters to feel my stomach sink, or to feel enormous relief at parts in the story.

The end is very dramatic and while lots of threads have been tied up, due to the nature of King's X, I was left wondering if all was as it seemed. I'm slightly sad to have finished the final book in this part of the series but mollified as Stephen has talked on this blog about a new installment later this year, moving from the Crusades to the Elizabethan era. I'll definitely be keeping an eye out for that! I would heartily recommend the series, and suggest you try and read them close together to save any hopping back to previous installations to refresh your memory.

Thanks for the terrific review TC! Actually all four of them! The series is new enough that I've been waiting on pins and needles for readers and reviewers to reach the end. It is really gratifying to hear your thoughts and I'm so glad that you liked it so much, I can't even say.

"They gave me a feeling of a circle being completed and were very satisfying but I felt a bit daft for not seeing some of them coming." I take that as very high praise, because making twists and turns work out like that is the hardest part of writing an effective story. And I had set out from the beginning to make that kind of intrigue a hallmark of every King's X story. Thank you very much for noticing!

Re: more books, I can't wait to get to the second King's X series. I have the story petty fleshed out but have much to do before I can start writing. I'm almost finished with the feature screenplay set in the "world" of King's X. I absolutely love it, and I wish I could talk more about it, but it's kind of spoken for with a production company and I don't think they would be too pleased if I started giving out details too soon. So I'm biting my tongue and holed up in my office. But yes, please do keep an eye out for the second series to begin in the fall of 2011.

And I hope that your teeth are okay. That didn't sound too fun.

Thanks for the review-- sounds interesting.
Brandi from Blkosiner’s Book Blog

I should have replied before now, sorry. I'm always pleased to hear an author say they feel I "got" their book(s)I'd hate to have misrepresented anyone's work through a lack of understanding. The screenplay must be very exciting, I'll look forward to news on that when you are allowed to share. I have one less tooth and a sore gum, but it wasn't as bad as I thought it'd be.