Book Review: The Company of Fellows by Dan Holloway 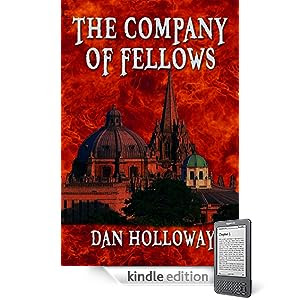 I previously read another book by this author, which I liked, but when I saw this book the synopsis sounded much closer to my usual taste. This line particularly caught my attention: "Imagine the Hannibal Lecter novels set in Oxford University. The Company of Fellows is a dark psychological mystery for anyone who loves Thomas Harris, Val McDermid, Minette Walters, P D James, or anything to do with Oxford." The only author on that list who doesn't feature several times on my bookshelves is P D James (think I'll have to rectify that soon) so it sounded right up my street.

Tommy West had a bright future as an academic until a breakdown halted his career in its tracks. He has since forged a successful career in interior design but his old life is brought back to the forefront when a former employer drops dead on his doorstep and his mentor, Professor Charles Shaw, kills himself. Armed with the research the Professor had done for his last project and urged on by his 18 yr old daughter, who is convinced her father was murdered, Tommy finds himself drawn back into the claustrophobic world of academia. As well as revisiting his academic past old flame Emily is now a police officer, investigating Shaw's death.

This is a dark and quite disturbing thriller. Some characters appear on par with Harris' Hannibal Lecter in terms of potentially sociopathic tendencies, their acts justified in the name of academic study. Some readers may find the themes make for uncomfortable reading, it made my stomach turn at one point in particular, but this isn't a blood and gore thriller. It is beautifully descriptive and brooding, and I found the Oxford setting and the author's style made a very pleasant change from the bulk of mainstream thrillers.

As well as the complicated story surrounding Shaw's demise the reader gets drawn into worrying about the impact going back to these surroundings is having on Tommy, and wondering whether he will find romance. There are plenty of suspects if Shaw has indeed been killed and the plot twists and turns - I certainly didn't see the end coming. Tommy is a very cultured man, surrounded by erudite people, and his consideration of Shaw's research to try and unlock the key to the mystery brings up some really interesting theological questions. I liked Tommy and was concerned for him as he got deeper into the mystery, wishing he hadn't.

I'm afraid there was a bit of a negative for me though. Unlike the other book I have read by this author there were more than a couple of typos. Compared to some books I've read it wasn't too bad but in places the typos made me chuckle where I shouldn't have, which is a bit off-putting. The formatting was fine and the typos are nothing a good proofread and update won't fix.

In the main this was a really good thriller, not quite as literary in style as the author's other book but still enough to set it apart positively from many other offerings, and well worth the bargain 70p price tag.

EDIT: Dan has been in touch to let me know that the book has now been amended on Amazon having been passed to a professional proofreader, so the errors I noted should now be gone. It also has a new cover, shown above, that suits the book much better.

TC thank you so much - if you love those writers you *must* get hold of some P D James as you'll just love her.

This has been proofed several times now, but clearly not well enough. Over the next fortnight I have both a professional cover designer and a professional proof reader getting to work on it.

I'm delighted you enjoyed the setting - it's an Oxford you don't really see in Morse, and the book's website has a lot more on that side of the dreaming spires. And I'm particularly delighted you got involved in Tommy's plight. Creating an emotional engagement with him as a character is one of the things I worked on hardest in later edits.