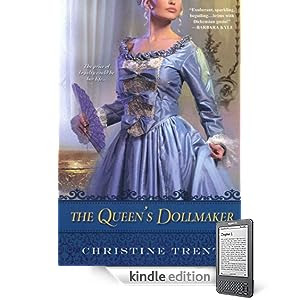 This is one of the books I picked up for £1 back during the "12 days of kindle" promotion and as I haven't read any  historical fiction for a while I thought it was high time I took a look.

Claudette Laurent lives in a France in turmoil in the latter half of the 1700s. Fire destroys her home and her father's workshop and then her parents die in the aftermath. Young and alone, unable to find her betrothed, she finds herself on a boat to England to start a new life. She begins life in service but is determined to make a better life and sees an opportunity using skills she learnt from her father. Eventually her name becomes well known and she is offered an audience with French Queen Marie Antoinette. The story takes the reader between London and Paris, showing the intricacies of English society and the dangers prevalent in France during the revolution.

To start with I found the story enjoyable and thought it would be a book I would really like. Unfortunately the more I read the more issues I had with it. From early on there were inconsistencies with how old Claudette was. At the start, in 1765, she is meant to be 5 years old. Then in 1781 she has been assisting her father for 16 years, but later in 1779 she turns 14, then in 1784 she is meant to be nineteen. I also noticed things like errors in the spelling of character's names. These aren't major issues but it seems poor that neither have been picked up before publication.

On the theme of inconsistencies I felt the way Claudette and her betrothed behaved seemed inconsistent. She is meant to be totally in love with Jean-Philippe, but when her parents die and she tries to find him she spends all of hours looking for him then visits the police station where she is told to go to the docks to look. She heads to the docks, is told no family with his name is there and promptly agrees to board a ship to England. Not exactly what I'd expected for a besotted teenager. When she later returns to France for a second time she does so knowing of all the troubles the country faces, yet with all she has going for her in her life in England she still goes to Paris on the whim of the most hated woman in France.

Jean-Philippe confused me greatly. He was a political creature in his teens, against the excesses of the King and Queen's court, yet when we catch up with him years later he has been working there for what must have been years (even with the off-kilter ages and years) just so he can see the abuses for himself. It seemed strange to have spent years in service of those he stood so strongly against.

Another of my problems with the book was the language used by the author. Some of her turns of phrase were awkward and while I don't mind the use of American spellings there were Americanisms creeping in. For example while in America you might say you walked x number of blocks it's not something I have ever heard anyone English say, and I very much doubt back in the 1700s London was laid out in blocks.

My final gripe about this book was that later on the parts focusing on Marie Antoinette and the unfolding situation in France became too much tell and not enough show, it was like reading from a history textbook rather than a novel. It almost felt like the author couldn't figure out a way to impart the information by weaving it into the text.

This book had a lot of potential, I liked the basic plot premise and the way it was interwoven with the story of Marie Antoinette and the French Revolution. However the execution really let it down, so I don't think I could say more than it was ok. I'm glad I picked it up when it was on offer!

Oh how disappointing. It seemed like there was promise, but I appreciate the honest review.

There was definite promise, and it does have mostly 5* reviews on Amazon's UK site but I just had too many issues with it.