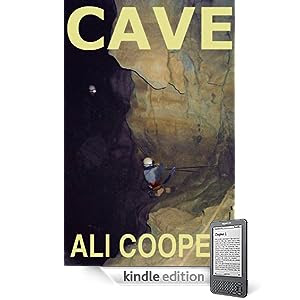 Ali Cooper's first novel, The Girl on the Swing, was one of the first books I read on my kindle and had I been applying star ratings back then it would definitely have been a 5* book. When I heard her second novel was out I downloaded it straight away.

Cave is Marty's story, told in the first person. Marty is stuck in a Welsh cave after someone has tried to kill him. He details his attempts to survive and escape from this potential tomb, and tells the reader the story that has brought him to this point. Marty started caving at uni and was part of a tight group. Meeting Carole and getting married ultimately brought his caving expeditions to an end, but when they undertake a trial separation Marty meets up with the gang again for this first time in ten years. He is re-bitten by the caving bug and drawn back into the group, which includes his first love Beth.

I loved the way the book started with Marty's current predicament and wove together recent events and the group's history to finally reveal at the end how it was all inter-linked. I couldn't imagine any of the characters being the culprit so I was hooked and couldn't wait to see whodunnit. Towards the end of the book there are a lot of revelations that make things clear.

I found it interesting that Marty comes across as pretty likeable, although a bit of a lad. Then late in the book he is subjected to a bit of a character assassination from one of his friends which cast him in a different light. I was still rooting for him though. As it is all told from his viewpoint the other characters are developed to the best extent possible without Marty being omniscient.

I have never been caving, but this book made me want to give it a try and made me realise I probably wouldn't be very good at it - not keen on the idea of tight crawls at all. To help the non-caver the author has put a definition of various caving terms at the start of each chapter, usually in relation to a new term that appears for the first time in that chapter. I thought it was a really good way of putting in a glossary without the reader needing to go backwards and forwards to an actual glossary, and while I'd have understood some of the terms in context others wouldn't have been so obvious.

This book has been well written and proofread, and if I was trying to be critical I would say that the very end, an epilogue of sorts, maybe wasn't necessary. I might have been happy without that and left to surmise for myself what might have happened next. That said, if it hadn't been included I would probably have wanted an epilogue to find out what happened next, so this is just being picky. I loved this book, the setting, the characters and the tension throughout. In a way it's another example in my recent run of bloke lit. The description says it's a coming of age story, the age being 40, but it's a whole lot more too. It's another great read by Ali Cooper.