Book Review: Dust on His Soul by Jason Blacker 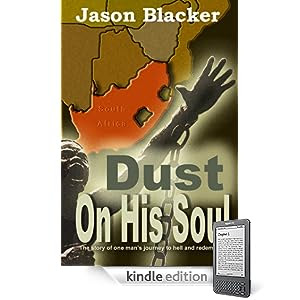 As you might have seen on my About Me page I'm particularly keen on real life or fictional stories about historical events in other countries. Dust on His Soul ticked the boxes for me, being about a fictional character but inspired by Stephen Biko and based on what was happening in 1970s and '80s South Africa. While I'm a bit young to clearly remember coverage at the time I thought I was pretty aware of what happened under apartheid.

Stephen Bankulu's parents Paul and Cynthia are involved in the ANC, trying to improve the situation of families in Soweto under a racist regime that sees their people virtually enslaved. They try and keep their activites, and the tensions of living in South Africa at the time, away from their son so that he can enjoy his childhood. However they are unable to do so and Paul's activism has serious consequences for his family. Fast forward fifteen or so years and Stephen is imprisoned at the notorious Robben Island, on a charge of treason. This is Stephen's story, one of hope and despair, life and death.

The book moves between Stephen's youth and his time at the prison, and as the book progresses the reader is able to see how the course of his life is influenced by the ANC, at times for the better, and at others for the worse. It gives a graphic portrait of the stark divisions between people divided only by their skin colour, and paints a dreadful but no doubt realistic picture of the abuses inflicted by one race on another. It doesn't make for comfortable reading but nor should it.

I have to admit I'm having a hard time knowing how to rate this book. It started well and I was keen to read on to find out how Stephen ended up in prison. The author uses some amazing imagery and there is a lot of descriptive writing. However towards the middle of the book I felt I didn't really have an emotional connection with the characters. Perhaps the level of descriptive writing was getting in the way of progressing the story and it was taking away from the emotion of the unfolding events. Around the half way point I might have given it just 2* but...I carried on reading and although there was no  change in style the pace seemed to pick up and I found myself feeling more involved in the story. By the end of the book I was welling up as events reached their climax. Putting it down I felt like I had really had my eyes opened and that it is the sort of book that I will still be thinking about in the future.

As I also had issues with some of spelling and punctuation I think I would have to give this 3 stars in the final analysis. This is the sort of story that needs to be told and read, and I was pleased that ultimately I came away from it feeling moved and with a greater understanding of what ANC members faced.