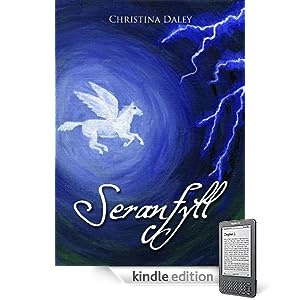 I don't generally read a lot of books that are suitable for 10 years + , but when I saw the synopsis of this book with its suggestion that fans of Harry Potter would enjoy it (I love HP) I thought I should definitely give it a try.

13 year old Rain lives in the kingdom of Yoan and is a slave in the service of a good master, but one who has racked up serious debts. Her life looks like it's taking a turn for the worse when she is sold to a slave trader and separated from sister Snow. Locked up at a slave market she sits like a piece of meat for sale, but is then bought along with several other young slaves by a drunk and eccentric young lord with a reputation. The others fear him, having heard he rides a winged horse and is the devil, and flee from the manor after he grants them their freedom. However feeling sorry for him Rain stays. Only one other slave, Coal joins her, more to protect her from Lord Domrey Seranfyll than for any other reason. Life at the charmed manor is a revelation for the new inhabitants, but all the good is outweighed for Rain by the continued separation from her sister.

I thought it was a wonderful world the author had created, and up to about the age of thirteen Celestria would have been my idea of heaven. While the language used and events in the book are suitable for the younger end of the audience it didn't feel like it was dumbed down or patronising. As well as the obvious comparison to Harry Potter it also brought to mind Disney's Fantasia with it's enchanted brooms and buckets. It held definite appeal for me, but probably wouldn't be so much of a fit for those who like their fantasy a bit darker.

The three main characters are very different but all well written, and I hope it's not too wrong that I have a bit of a crush on Domrey! The menacing Lord Morgrav provides a dose of chilling nastiness and a good foil for Lord Seranfyll. I particularly liked the way the author has made Domrey  a supporter of the abolition of slavery, and worked that into the plot, and her note at the end got me thinking more about the issue in the wider context.

I found the book well paced, drawing me into the story quickly and other than a handful of typos there's not really anything negative for me to say about this wonderful charming (and charmed) book.

While I'm not sure this is a read for me, this sounds like a unique and interesting story.

This sounds like a cute, fun read. I like the enchanted broomsticks part. Sometimes it is fun to escape into enchanting fantasy instead of dark fantasy.

This was definitely another step outside my normal zone but it was so worth it.