Book Review: Truth of the Python by Paul Vitols 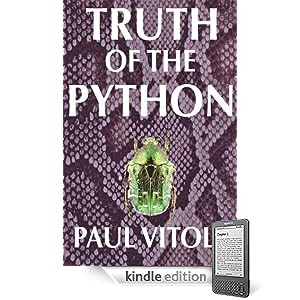 This book is described as a literary thriller, and with the book having a historical element it caught my attention. Set in Vancouver in the early 1990s hypnotherapist Philip Dozier is treating university student Greg Brodie for an embarrassing personal problem. During the course of their sessions Greg regresses 25 centuries and it seems in a previous life he was Greek philosopher Pythagoras. He also acts a channel for a being that knows Philip's secrets. Both men become obsessed with the past, Greg convinced he is on earth to continue Pythagoras' work and Philip concerned about his historical connection with Greg and repaying karmic debts.

This is a well written book that covers some very interesting territory. I particularly liked a lot of the parts set around 500BC, reading about the different civilisations, their religious beliefs and the life of Pythagoras. I also found the present narratives enjoyable, and felt a degree of concern for Greg. However I found it hard to warm to therapist Philip, especially as his behaviour became less moral, and although she wasn't a major character I felt more empathy for his wife.

While I was keen to read on to find out how the men were linked, and to discover more about the entity Greg channels there were parts that were overly philosophical for me. It's not a topic I know a great deal about, I found myself a bit out of my depth and those parts dragged a little for me. I was happier once I got back to the more straightforward accounts of the past and present. Overall though the style, while it had a literary bent, didn't make for a hard read.

This was a thought-provoking story with an element of suspense, and although it didn't hook me in quite the same way as other thrillers, it was a good read that has been well edited with no noticeable typos.