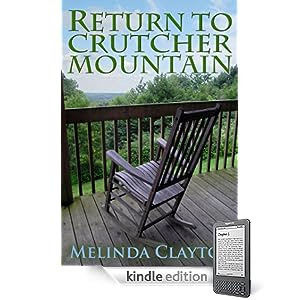 This book is the sequel to Appalachian Justice, which I read and was moved to tears by not so long ago. It went without saying that I was going to read the second book, which was released in print on Wednesday, slightly earlier as an e-book.

In this book we catch up with Jessie, who was rescued by Billy May Platt from her abusive step-father. Jessie is now in her 40s and still coming to terms with her childhood and the loss of her adopted mother. She is now living in LA, and has been a huge sucess in her career. In order to fulfil Billy May's dying wish she has become involved in a project providing an outward bound experience meets respite care facility for children with additional needs. A series of strange events bring Jessie back to Crutcher Mountain and force her to face her past.

The story is told from two viewpoints, Jessie's and Robby's. He is a young man staying at the facility, he has Downs syndrome and provides a very honest, quite amusing view of the world and what is happening. I liked his straightforward insights and thought using his naive perspective meant the parts he narrates really cut to the chase and was refreshingly blunt and uncomplicated. Where Robby sees black and white Jessie sees things in an array of greys and has recruited more than one therapist to try and help her move forward while trying to avoid looking back.

Althought this is a sequel there were enough recaps of the story in Appalachian Justice for it to stand alone, but I think having read the first book I got more from this one having already connected with them. As the story unravels we discover a lot more about what happened to Jessie before she was found by Billy May, and both she and the reader make a lot of new discoveries.

This is an emotional whodunnit, as I not only wanted to know who was behind the strange happenings at the lodge but I was also concerned with what would happen to Jessie and Robby and was invested enough in the characters to care about them both. There were plenty of revelations as the book reached its climax, the most shocking of which I definitely didn't see coming.

Although the sequel didn't quite have the same emotional impact on me as Appalachian Justice this is another excellent book by Melinda Clayton, and I would happily recommend them both.

Hi - I've just hopped over from Friday's Book Blogger Hop. This series sounds really interesting. I haven't heard of it before but I certainly like the sound of a shocking climax that you didn't see coming. That's always a recipe for a good read. I'll look out for these - thanks!

They are great books, and as they had such an impact on me clearly had the sort of characters I became really involved with.