Book Review: Peter and the Vampires by Darren Pillsbury 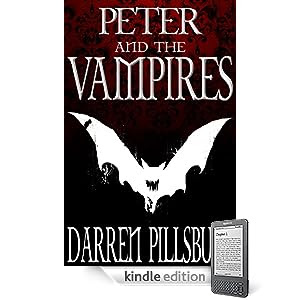 Peter is ten and has just moved from California with his mum and 2 year old sister. He has been uprooted, torn away from his friends and made to move in with the grandfather he has never met. The house is huge and spooky sounding, with plenty of places off limits to Peter, including the basement which is not to be entered on pain of death! He quickly meets his new neighbour Dill, who thinks he's streetwise and savvy, and considered a bad influence by Peter's grandfather who doesn't want around him. The town they move to has some seriously weird things going on, as you can tell from the titles of each story within the book, and Peter's grandfather knows far more about what is going on than he lets on. As well as dealing with starting a new school and making new friends Peter ends up with plenty of other things on his mind, and dealing with all these incidents soon cements his friendship with Dill.

As well as the monster stories there are undercurrents based around the boys' family lives. From the start there is some mystery about what has happened between Peter's parents, and Dill's dysfunctional clan made me sympathise and feel more understanding towards him. There is also clearly more going on with Grandfather than is revealed in this book, and the hint of a curse is also present. There are two more books in the series, again divided into shorter stories, and I'll be interested to see where those threads go. What I really want to know is what is going on in the basement!

With the two main protagonists being just ten, and with the tone being scary and a bit disgusting without being too graphic I can see tweens enjoying these stories, but at 30 odd I found myself laughing in places, and picking up my reading pace as the stories reached a climax. The way the kids spoke, the things they worried about and the terms they used reminded me of being a kid again, and it was great!

This was a really fun read, and although it took me a minute to wrap my head around how the books within the book worked once I got it I thought it worked nicely. I also thought it was well formatted and proofed so was a well-presented end product. No doubt I'll be revewing Peter and the Werewolves and Peter and the Frankenstein in the future.

Email ThisBlogThis!Share to TwitterShare to FacebookShare to Pinterest
Labels: book review, Darren Pillsbury, Peter and the Dead Men, YA