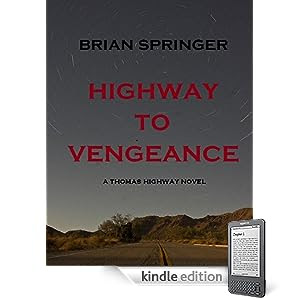 In the past I have read a lot of books by authors like Jack Higgins and Colin Forbes but got a bit tired of the same stories rehashed and the slightly dated feel to a lot of their back catalogue. As such I eased off of novels in that vein. However the synopsis for this book sounded current and interesting I was hoping a new author and characters would perk me up.

Thomas Highway is a former Navy SEAL who is hellbent on revenge after the murder of his wife. She is killed in a set up hit and run accident which he witnesses. He starts tracking down those responsible with the assistance of best friend Willis, who runs a security company, but comes up against a government department that wants to stop him before he blows a major operation trying to stop a WMD being brought into the US over the Mexican border. He is determined to deliver justice for his wife though and another, covert, government agency wants to help him out.

The story is told in the first person and I felt like I was drawn to Highway from the start. He is quite an endearing character, clearly tough but with a soft centre when it comes to wife Josie. The chapters are interspersed with flashbacks to his SEAL training which I thought were a clever way to establish how much of a hard guy he was without taking away from the action as it was unfolding in the present. There was action from the very start, building up to what I felt was a satisfying ending.

There was an element of having to suspend my disbelief a little at the notion of Highway and Willis being able to so quickly and easily access all the kit he needed to go after the culprit, and having the amazing set up Willis did, as both are civillians. I also wondered how even a former SEAL could compartmentalise the death of his wife as easily as he appeared to. However it's possible that I'm a little naive as to what really goes on in the big bad world, and actually I do enjoy taking a leap of faith when it's in favour of the "good" guys and makes it a more exciting read.

This was a really enjoyable action thriller that I raced through, with a main character I could root for. The plot wasn't overly complicated but with enough twists to keep me wondering. If you're a fan of the genre this book is well worth a look.