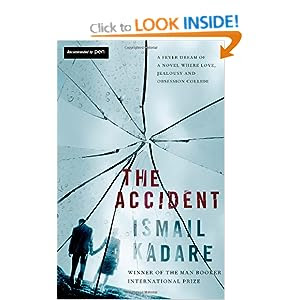 I have just finished reading this book and it was one of the most painful experiences I have had in a long time. If it wasn't for the fact it was the first book I was reading towards the Borrowed Book challenge I don't think I'd have bothered to finish it. I had picked this up in the library because I had seen positive reviews and I was aware it had won the Man Booker International prize. The plot sounded promising so home it came with me.

The book is in three parts. The first part was very good. I like the narrative style and the way the story was unfolding. There is an accident that kills lovers Rovena and Besfort, and the driver of the taxi they are in when they die provides a strange report of how he lost control when he saw them in the rear view mirror trying to kiss. The official reports set up a mystery to be solved and I was looking forward to getting behind the relationship and finding out what had happened.

It went seriously downhill in Part 2 where a mysterious investigator pieces together their last 40 days together and recreates them from both his and her viewpoints. It is a very strange relationship that has somehow lasted for years. The style becomes fragmented, skips around following trains of thought and moves about through the period of their long affair and became very hard to follow or even understand. Part 3 was meant to explain what happened to the couple but ultimately the book ends with far more questions than answers.

Besfort remains a complete mystery to me, and while I had slightly more understanding of Rovena's character and emotions I didn't really "get" her. The blurb also says that the destructive relationship "mirrors the conflicts of the region" they come from - the Balkans. That is something I have only a passing knowledge of, so I feel like I missed that aspect of the book completely.

I think there are 3 explanations for why I didn't enjoy this book 1) I'm not smart enough to appreciate it 2) The author wrote it in such a way to intentionally disorient the reader and mirror the emotions the couple may have felt as they battled through their relationship or 3) it's just not very good. As it has received acclaim and won major prizes I suppose it isn't 3) and I'd rather it wasn't 1) so in conclusion I think the author achieved 2) very well but it didn't make for an enjoyable read for me. Any references to the Balkans were too oblique for me to have even felt like I learnt anything about the region. I think I might head back into my comfort zone with whatever I read next.
Posted by TC at 22:49

What a shame that your first challenge book was one that didn't work for you at all. It's not a book I'm familiar with and I think I will leave it that way :)

Never mind, off to the library in the morning to take that back and find something else, maybe Birdsong or maybe an old favourite author to make up for that one.