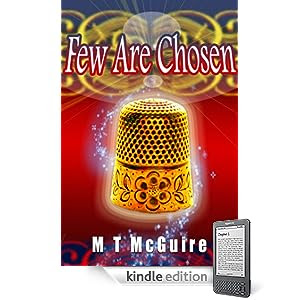 I was offered this book for review and although YA fantasy isn't something I'd usually consider my thing I took a look at the reviews and seeing mentions of Harry Potter and Hitchhikers Guide, which I have read and seriously enjoyed, thought maybe I should give it a go.

The Pan of Hamgee has been blacklisted and on the run for years, quite a feat as others only manage it for a matter of months under the oppressive regime in K'Barth. Having eyes in the back of your head probably helps keep you out of the clutches of ruler Lord Vernon and the equally ruthless Resistance - that and a massive yellow streak. Without much choice in the matter he ends up as getaway driver for a criminal gang, a job he excels at. While life hasn't been comfortable for The Pan for a long time it starts to become more and more curious when his landladies and an old man start making oblique references to another resistance movement and he lays his hands on a mysterious thimble. The first part of the book sets up The Pan's life and current position, and the second part really introduces the mystery and magic.

This book creates a whole new universe with a range of species all of its own, those species having their own appearances and characteristics, all well described by the author. I'm always slightly concerned about fantasy novels, with whether I'll remember lots of strange names or lose the plot. In this case K'barth is about as close as it gets to a name with lots of Xs and Zs and no vowels, and some of the names are brilliantly comic so no problems on that count. It is well edited and I only spotted a couple of typos I'll pass on to the author.

The Pan is a lovely character, he is abundantly clear that he is a coward and has no grand illusions about himself, but people around him (and gradually the reader) see something special in him. Being so down on himself makes him all the more likeable. I really enjoyed the way his relationship with his scary Swamp Thing boss developed and the change in The Pan after he starts questioning things.

I would say this book is probably most suitable for tweens and younger teens but even in my early 30s I still really enjoyed the read. It is left on a real cliff-hanger and I definitely want to carry on  reading the series.

I enjoyed this too , even though its so different from what I woudl usually read. My review will be up later today

Finished this book during half term - a testimony in itself, given demands of children at the time. Was initially put off by the occasional typo and layout, but the style of writing and storyline are good, and I kept on reading because I really wanted to know what would happen next

The Jocker, I'm not sure whether all the spammy links are intentional or you have a virus problem. I appreciate comments on the blog but not the spam links.