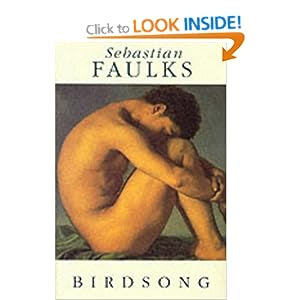 This is another of those books I have approached cautiously, having seen lots of critics rave about it, but then finding really mixed reviews online. I decided to borrow it from the library towards the Borrowed Book challenge rather than buy it, in case I felt the same way about this as I did The Accident.

This book is an historical saga that moves around in time from 1910 to the 1960s and 70s. The book opens in 1910 where Stephen Wraysford is a young man in France on business. He falls for his host's wife, Isabelle, and their affair has dramatic consequences for the whole family. We next catch up with him during the Great War where he is fighting in the trenches and trying to find sense in what is happening. Decades later we meet Ruth, who is trying to find out about her Grandfather through an encoded diary.

The author writes in a very descriptive manner, which in some places I found wonderful and moving, although in others it was maybe a little too wordy. The descriptions of the events of World War I and the deaths and injuries are graphic and disturbing but nowhere near as disturbing as it must have been to have lived through it so it felt totally warranted. Ruth's musings about her life in the 60s and 70s provide an interesting contrast to what previous generations had experienced having lived through two World Wars, and it also made for a comparison between what was demanded and expected of Isabelle and Ruth as women living in such different eras.

This book ticked so many boxes for me that my concerns were not warranted and I'm so pleased recent experiences with literary best sellers didn't put me off.
Posted by TC at 15:59