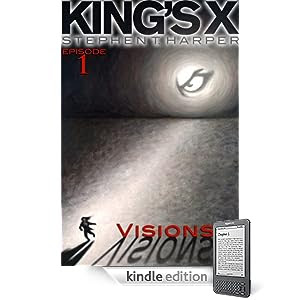 I bought this novella having seen it promoted on Amazon's kindle forum and finding the synopsis really interesting. It is the first in a series of four, and skips between the modern day and the late 13th and early 14th century. It is listed as a crime and mystery thiller, and I'd say it certainly lives up to the mystery tag!

In the present Detective Wendell Book has lost those he loved and had to watch his father's decline into madness. He works vice and his partner thinks he is too soft on the runaways they encounter. When Molly appears in his life her story is too familiar to Book, making him re-examine memories he's been avoiding. In the past we find out a little about the start of a love story between Khali and soldier Sebastien, and she is used to try and extract information from him that he won't reveal under torture. Clearly there is a link between the stories, and a great mystery to be revealed about the King's X, but this first book is the hook that draws the reader in.

This book has grabbed me and I'm going to have to work the subsequent novellas into my reading schedule some time very soon. At the start the story skips around quite a lot, both in time and in which characters are being followed, but I didn't find it hard to keep the threads straight at all. I found Book a particularly interesting character and really want to know more about Khali and Sebastien, as well as finding out what the mystery is. I suppose that all points to a very sucessful first installment.

I thought this was really well written and I liked the author's style. There was a certain economy with descriptions that allowed the narrative to move quickly, yet still giving enough of a sense of the surroundings and events. A final plus point, it has clearly been well proof-read and edited and so I had none of the little niggles that often crop up, particularly in e-books. I'm so glad I downloaded this and if I didn't have another couple of books on the go and others in my TBR list that ought to have been read by now I would probably go straight through the rest of the series. Big thumbs up from me!
Posted by TC at 22:35