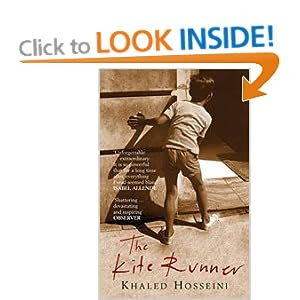 Having achieved such critical acclaim this is a book I've been meaning to get round to for quite some time. I had been putting it off as I have found such highly praised books a disappointment in the past.

The book is based in Afghanistan and revolves around Amir and his relationships with his father Baba, and their servant's son Hassan. Amir and Hassan have been brought up together but their relationship is marked by the divide between their different castes. Amir's relationship with his father is also not entirely easy, the young boy constantly try to win his father's approval. The local kite fighting tournament provides Amir with a way to make his father proud, but the events of that day change things forever.

After the Russian invasion Amir and Hassan move to the US, where they have to start over and rebuild their lives. Despite the passage of time and his successful adaptation to life in another country Amir still seems tormented by the past and eventually returns to try and right the wrongs.

This book is one of extremes, joy and sadness, trust and betrayal, rich and poor, peace and war. Some of the issues tackled are quite sensitive and I should have found it very moving, but unfortunately I just could not warm to Amir. I couldn't see his relationship with his father and the cultural influences as mitigating the way he treated Hassan and found him unsympathetic. His attempts to find redemption were only partially successful to me. I also found some of the plot predictable which lessened the impact.

That said I found some of the descriptions beautiful and highly evocative and I find Hosseini's style far more accessible than some literary fiction. It was also interesting to read about Afghanistan before the most recent conflicts and the state of the places familiar to Amir afterwards, and to discover more about a country that has only really received attention because of wars.

Finishing the book I was pleased that I had read it and did like it, but it certainly isn't a 5* book for me.
Posted by TC at 21:15