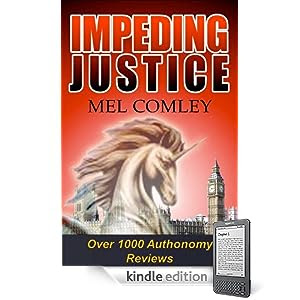 This book was one of my kindle bargains, as I write it is available at the bargain price of 49p, and it is proof that cheap does not necessarily equate to poor quality.

DI Lorne Simpkins has been on the tail of The Unicorn for 8 years but her attempts to capture him have been thwarted. The chase becomes really personal when he kills her partner and then kidnaps her teenaged daughter. The book spans a period of few days and starts with action and mantains that, and a large degree of tension, right through the book. In some places the violence, although not always explicitly spelt out, might be uncomfortable for some readers.

It is a good pacey thriller but unlike some books in the genre Lorne's character is well developed. She's a tough woman who may not have been getting her work/life balance quite right, and we see her grappling with how to be a good wife and mum while still doing the job she is clearly devoted to.

As a slight negative there were a few issues with formatting, with words running together and similar, but I understand since I purchased the e-book there has been an update. I'll be requesting the free update from Amazon and hopefully those issues will have been ironed out.

This was a really good read and I'll be looking out for the sequel which I believe is due soon.
Posted by TC at 11:37

I just bought this a week ago for $0.99. It was a great bargain, but I have not read it yet. I was happy to read your review and see that it was worth buying.

Thanks for the reveiw! Hopefully the formatting wasn't too distracting...
I'll have to keep my eyes open for this one.
Brandi from Blkosiner’s Book Blog

I now have the updated copy on my kindle but haven't had time to look back through it. I'm sure from what Mel has told me the issues have been ironed out. They weren't the sort of errors that really bother me and the story was plenty good enough for it to be a minor issue.