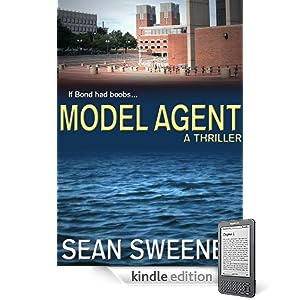 Ok, I have to admit it, I like thrillers but what really made me take notice of this book was the strapline on the cover "If Bond had boobs..." It made me laugh and having downloaded and read the sample one-clicking the book was a no-brainer.

Jaclyn Johnson is a CIA agent who has been brought up by the State, after her Government official parents died in the September 11th attacks. When 46 people are killed in Boston after drinking poisoned water she is put on the case. She is partnered up with a senior agent and they quickly home in on the most likely suspect, a man who is trying to bring the world to war over water.

One of the things I loved about this book was the number of strong women in positions of power. It makes such a refreshing change especially within a spy thriller. Another is that Jaclyn is strong and beautiful and also happens to have a disability. Sean, I take my hat off to you, providing inspiration for kids with handicaps is something close to my heart (and if my choice of language isn't PC enough for some readers sorry, but as the parent of a disabled child semantics are the least of my daily concerns) and we need more mainstream books, films and tv shows prepared to show people with impaired sight, hearing, mobility and so on in challenging roles, rather than just there to tick diversity and equality boxes. Now off my soapbox and back to the book....

We get to understand a good bit about Jaclyn and her motivation but the other characters aren't treated in quite such depth - fair enough as she's the eponymous heroine. If I had one criticism it's that the villain of the piece, Chillings (suitably named for a man who invents a bottle that keeps liquids cooler for longer) is deranged but I don't really feel sure about what has driven him to the point he's at. It appeared to be pure and simple greed but as the story progressed I became a bit unsure whether that was his only motivation and why wealth was so important to him. Perhaps I missed a key clue to this or need to apply my imagination a little more.

This isn't a short book and I've still managed to read it in less than a day, despite spending a lot of that day in bed with the flu. It is a great, fun, pacey spy romp. I thought Jaclyn's gadgets were brilliant and although I'm not a big Bond fan could imagine her kit attracting Q's attention. It was a far lighter read than other books in the same vein but more enjoyable for it. The book is well written, and I had no issues with formatting or typos which often pop out at me in e-books. The teaser for the sequel - Rogue Agent - will have me keeping my eyes open for it's release.
Posted by TC at 23:10